Announcement of the death of Mr James (Jim) Chrimes – Shareholder and Main Board Director
Posted on October 14, 2019 in Uncategorized

It is with profound sadness that the Shareholders and Board of Directors of the Service Metals Group of Companies announce the death of Mr James Harry Chrimes.
Jim was instrumental in the original setting up of our group of companies along with Mr Graham Wilson and myself. We spent many happy years working together and the original bond and friendship endured to the present day. Jim remained a Shareholder and Main Board Director right up until his passing
Jim slipped away peacefully on Sunday 13th October 2019 following a long period of illness bravely borne.
He will be greatly missed by his friends and colleagues across our organisation and by our many customers and suppliers.
Jim was much more than a colleague to me and Graham; he was a good friend for many years, that friendship was formed way before our organisation came into existence.
He was the patriarchal figure within our organisation and played a pivotal part in the development and expansion of the Group. Jim remained active until very recently.
Jim will be reunited with his lovely wife Joan.
Funeral arrangements will be announced at a later date. 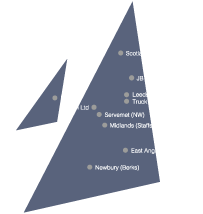